Bhutan is a mystical Kingdom about the size of Switzerland tucked into the Himalayas between the two giants of India and China. This stunning country has put Gross National Happiness (GNH) ahead of GNP (Gross National Product) which has created a culture in which the 750,000 residents live a peaceful lifestyle primary based around the Buddhist culture. Coming here for the 7th edition of the 255 km Tour of the Dragon mtb race I was expecting something special, but was blown away. 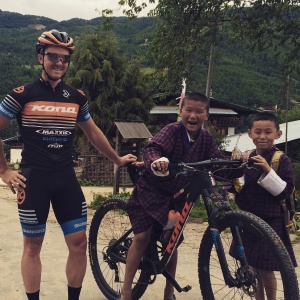 Travelling from Mongolia was a complete 3 day gongshow, landing a day late without my bike. Those close to the Tour of the Dragon made some calls and had a different airline bring in my bike Thursday morning, just in time to catch a 20 minute flight to Bumthang in the centre of the country. This small village sitting at 2500 M would be the start of the race and is surrounded by ancient temples and sacred places which made for some very cool pre-rides before the race start at 2 am Saturday morning. Amankora 5 star Lodges hosted me throughout my trip and there first class treatment erased 4 days of travelling and jet lag in the blink of an eye.

The race itself was launched in 2010 by HRH Prince Jigyel Ugyen Wangchuck and the Bhutan Olympic Committee (BOC) as a way to promote adventure tourism in there country. At the pre-race meeting we were treated to a freshly caught wild bore and local Bhutanese food such as buckwheat, potatoes and organic veggies. Not only did the countryside remind me of Canada but so did the food.

Having raced over 500 races in my life in countless different areas of the World its not often a race sparks my interest as much as this one did. Heading out with headlamps at 2 am for the first 3 hours was cool but also sketchy as there were black cows laying randomly on the road. It was tough to see them against the dark mud or asphalt surfaces and were essentially black land minds just waiting to be hit. The first couple hours were otherwise cruisy as we eased into the race, dodging cows and slowly climbing up to Yotong La pass (3430 M). From here the race turned into a survival experience at the blink of an eye.

Cresting the pass a rainstorm came in as we hit a horrendous descent for over an hour as the road is under construction and basically one big pile of mud and potholes. We were warned the roads were bad but this was more like racing through a pig stye. Aaron a local expat took off on the decent while I hung back with my Nepalese buddies Roan and Rajkumar as they are both great bike handlers as our goal was to get down the mountain without any catastrophes.

The Prince had told us he would have all the construction machines out shining there lights on the tricky sections and the workers would have flashlights lighting up the bigger potholes. This sounded to good to be true but it was as the Prince had a volunteer on nearly every corner shining a light and cheering us on. The amount of support out there was amazing, only a Prince could organize a whole country to come together like this for a race.

Daylight started to come in as we hit the bottom of the descent and started climbing up a narrow winding mountain road snaking through jungle vegetation with cliffs on either side. The mud was brutal and at points we had to get off and walk through 6-10 inches of it. Being completely drenched, pushing our bikes through mud with over 180 km to the finish wasn’t what dreams are made of. Eventually the road conditions improved to just being really shitty but at least we could ride our bikes and soon we caught up to Aaron and had a nice group of 5 riders in the lead group as a local Bhutanese had also caught up.

From here the road continued to snake along a mountainside with patches of it looking more like a river bed as it was starting to flood over and get washed away from the constant rain. I was concerned the race may be cancelled as it looked like the road would give way at any moment. Apparently this is the National highway in Bhutan, but in parts it looked more like a wide goat trail.

It stayed a complete mess as we slowly started the gentle 50 kms climb up to Pele La pass at (3430 M). Here the other boys dropped back as I’d embark on a 9 hours solo ride to the finish in what was one of the most memorable rides of my life.

The scenery was stunning as Bhutan has kept a huge focus on preserving there environment and have succeeded with the majority of the country still untouched and in its natural state. Sadly enough this isn’t something often found over in this part of the World and is something the surrounding countries could learn a lot from.

Heading over the 2nd big mountain pass (Pele La) a muddy 75 kms descent dropped us nearly 2000 M to the valley below. Thinking it was going to be a fast race I opted to run semi slicks. This made the descents rather squirrly and ended with a big crash over the handlebars as the front wheel was engulfed in some thick mud. A little winded I straightened the handlebars and continued on thankful to still have the bike and body in one piece. Usually descending is fun but this one was rough and required a lot of concentration with many open cliff faces, huge mud bogs and a few close calls with vehicles and random dogs. The scenery to the open valleys below were stellar but there as little time to take in the views!

Eventually off the descent the course was actually flat as the road followed a river valley for a while and the temperature hit the low 30’s before the final 40 kms climb up to Dochula pass.

Throughout my racing career I can’t remember having to take a dump during a race except during the Yak Attack in Nepal when no amount of diapers could’ve solved that problem. On this day my stomach started exploding at the base of Dochula climb. Fighting it off for a while I eventually had to run into the ditch to unload. Getting my shorts down just in time, something that looked like mud and didn’t smell that bad came out. After eating mud for the past 9 hours I guess the body needed to eventually get rid of it.

Some little kids ran over to see if I was okay and started laughing as they saw what was going on and put there hands over there eyes. Not having any toiler paper I used some vegetation then opened a Mongolian granola bar as they had a nice paper packaging which came in handy at this critical moment.

Crawling out of the ditch, the kids had ran over to my bike and started wiping the mud off and had it standing upright ready to roll. “Don’t give up mister!”. It was pretty inspiring although I had no thoughts of giving up, just needed little toilet break.

The last 4 hours of the race were a struggle as the 40 km climb went on for ages with the stomach still rumbling. At one point a pit stop was needed at a corner store to buy some black tape to fix my foam grip which had ripped off my bike as a result from the earlier crash. Picking up some oil as well for the chain I offered the store owner some money but was declined as they cheered me on.

Only able to down half a pack of cliff blocks (100 calories) and 1 Mongolian granola bar (90 calories) over the last 4 hours of the race left my body in a state of dizziness, fighting off a solid meltdown. Thankfully the last 30 kms was mostly downhill as the course hit Bhutan’s capitol city of Thimphu, with 4 cops leading the way in. The adrenaline fired up sensing the finish line which eventually came into sight with hundreds of fans surrounding the Clock tower plaza in the middle of town. It’s hard to say if it was the hardest day of my life on a bike but it’s certainly in the top 5 and right up there with a couple of 24 hour solo races. 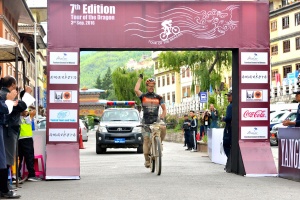 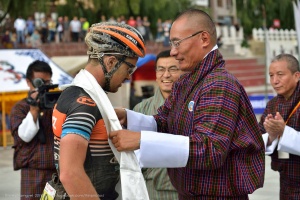 The finish area was a huge celebration with the Prime Minister on hand to congratulate us which was a great honor. He is a tough man and has finished the race 3 times himself, once with a 12:48 finish. Pretty smashed after racing for 13 hours and 2 minutes I was escorted into a massage tent and taken care of before heading back up to the AmanKora lodge to check in and relax like a King. I’ve never really had 5 star service like this but I tell you there’s no better way to end a hard ass day on the bike.

The days following the race were a bonus as the Prince had opened the door to extend my Visa so I could stick around to host some clinics for the locals and tour around. AmanKora extended there hospitality for a few days with my friend Uygen lining up a stay at Khangkhu Resort for the last 2 nights. The Bhutan Olympic Committee extended my escort DJ and we had an unreal week touring around together.

Hiking up to Monasteries, relaxing at Amankora, sightseeing, biking around the countryside, sharing experiences and knowledge with the locals and meeting new friends. 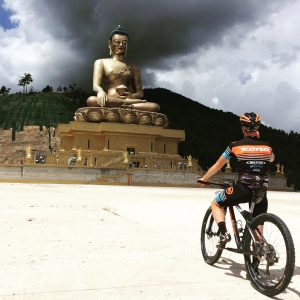 As far as I’m concerned Bhutan is heaven on earth and comparable to the natural beauty of western Canada, with the added religious aspect of Monasteries hanging off cliff sides and prayer flags and wheels dotting the countryside. They call it “The Land of Happiness,” and I sure can’t argue that as the people are the real highlight of the country.

Huge thanks to the Bhutan Olympic Committee, John Reed and Amankora resorts, Jigme Thinley, my escort and buddy DJ, Uygen, Drukair for the business class leaving the country, and everyone else that made this unreal trip a reality. It was a struggle getting here and I I almost pulled the pin a couple times but sometimes the best adventures in life come when you’re least expecting them.

Off to Singapore tonight and East Timor tomorrow for the next round at the Tour of Timor.

Tour of the Dragon – a unique challenge